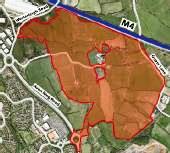 Work is set to start on one of South Gloucestershire’s landmark development schemes on the outskirts of Bristol. The scheme at Emersons Green East was formally granted outline planning allowing site preparation and enabling contractor Britannia Construction to formally start work on 24 June. Taylor Wimpey, which also owns most of Emersons Green East, plans two new primary schools, a secondary school and other community infrastructure alongside up to 2,550 new homes.

The scheme represents the final stage in the Emersons Green development and is a key element in the development of the East Fringe area of South Gloucestershire. As well as significant new provision for employment and homes, the site will feature new transport infrastructure including a major new Park and Ride facility, a new footbridge over the Avon Ring Road and a network of new footways and cycleways.

It includes the science park site, which has already been given the go-ahead. The £300million science park survived a major spending cull announced by the coalition Government that resulted in projects worth £2 billion being axed. More than 6,000 skilled research and development jobs are set to be created at the 820,000sq ft of research facilities on the 25-hectare (61-acre) site, due to be finished in 2020.

Colin Hunt, Chair of the council’s Development Control East Committee said: “We are pleased that this long awaited development can get underway and bring a much needed, high quality mix of homes to one of the region’s Enterprise Areas.”