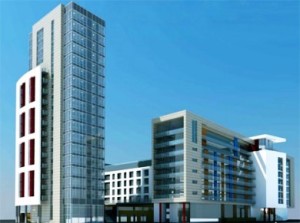 Bellway has restarted construction on the Prospect Place tower development that was stopped in its tracks during the depths of the credit crunch. The unfinished concrete frame came to symbolise the fallen plans for the Penarth Marina area, which remain half completed. Now plans include 76 one and two-bedroom apartments over 18 storeys; all of which will be water facing.

Bellway’s corporate affairs manager Julian Kenyon said “Following the completion of our successful Quayside development we wanted to maintain momentum in Cardiff Bay, and we are confident that the level of demand will support the completion of this landmark building at Prospect Place.”