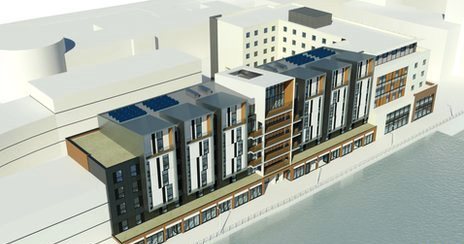 Plans are being submitted for a £20m project in Swansea's waterfront which developers say could create over 300 permanent jobs. The Waterside Centre has been designed to create a continuous frontage of leisure, retail, piazza, walkways and public facilities overlooking the water. It will offer up to eight shop and restaurant units, with a 94-bed care centre for older people and around 25 homes built above them.

Waterstone Estates and 55 Plus Limited will submit a planning application to Swansea Council today for the development which could be completed by 2015 if it is approved. The plan would complete the northern side of the Prince of Wales Dock. Waterstone Estates was responsible for the previous phase of development at the Prince of Wales Dock, which saw a 132-bed hotel, a restaurant and a supermarket open in November 2010. The centre would be developed on land between Swansea’s Norwegian church and a retail and leisure complex featuring a Tesco store, a Beefeater restaurant and a 132-bedroom Premier Inn hotel, built in 2010.

Gareth Chappell speaking for Waterstone and care provider 55 Plus said extensive pre-application meetings had been held with the council to ensure the proposal complied with the local area plan. He said "The retail space is six units but they can be flexible depending on what shops came to them, so there could be eight. It's rare to get these sorts of units that look directly onto the waterfront. Water is a definite attraction for people. There will be 140 jobs in the care home and 83 in retail, plus 120 temporary jobs for the construction phase."

If the bid is successful, Mr Chappell said developers aimed to start work by spring next year and were hoping for a maximum construction time of two years. The scheme is expected to create 225 jobs once it is up and running and 120 positions in the construction phase. Employment through the care centre is likely to account for 140 of the new jobs.

Russell Greenslade from Swansea Bid which represents city centre businesses said he would welcome anything which increased visitor numbers. Phil Morris, of property agent EJ Hales which will market the scheme, said: “We are really excited about the prospect of letting the retail and restaurants in this development. It is always rare to get units overlooking water and we anticipate excellent tenant demand.”