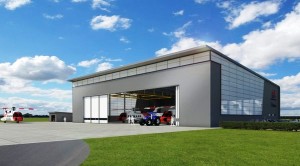 Plans for a search and rescue helicopter base in the Vale of Glamorgan have been given the go-ahead by councillors. The new base on the former RAF St Athan site could create up to 35 jobs and £7m in local investment. The helicopter base can now be created at the former RAF St Athan base after the Vale of Glamorgan Council awarded planning permission.

The development at the base, which is now called MOD St Athan, is part of a £1.6bn 10-year contract secured by London-based Bristow Helicopters for a national network of search and rescue emergency bases overseen by the Department for Transport. The St Athan search and rescue hangar will be to the south of the main runway at the base and is expected to create up to 35 jobs and £7m in local investment.

Local firms and workers will be brought in to build the search and rescue base which will house two helicopters operating around-the-clock 365 days a year. There is expected to be one training flight a day from the base with an estimated 250 to 300 rescue missions a year, based on activity at a similar site in the south of England.

Vale of Glamorgan MP Alun Cairns said the contract would mean about 85% of high and very risk areas could be reached by helicopter within half-an-hour, compared with 70% at present. Speaking earlier this year, aviation analyst Chris Yates said the two new Welsh bases would allow the service to provide extended coverage. He said: “Wales is doing extremely well out of it. There’s some very difficult terrain right across the country, of course, and often at times people do get into difficulty.”