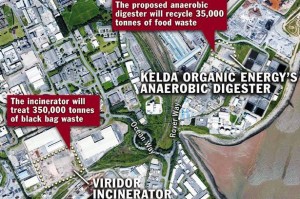 Plans to build a £15m food scraps recycling plant have attracted four companies bidding for a 20-year council contract to recycle 35,000 tonnes of food waste collected from across Cardiff and the Vale of Glamorgan. These include preferred bidder Kelda Organic Energy, who has submitted plans for an “anaerobic digester” on land next to the Welsh Water sewage treatment works in Tremorfa. The others shortlisted are Agrivert Limited, GENeco and Shanks Waste Management Ltd. Another site at Lamby Way, next to the landfill tip, is also being considered.

Cardiff council’s household food scraps are currently sent 50 miles away to be processed by an “in vessel composting” plant in Sharpness, Gloucestershire. The council says its Cardiff Organic Waste Treatment Project contract will meet Welsh Government recycling targets. Anaerobic digestion (AD) uses bacteria to break down food leftovers to produce a “biogas” of methane and carbon dioxide, which is used to generate renewable electricity.

The planning application comes just three months after a waste incinerator being built one mile away in Splott was awarded a 25-year contract to burn black bag rubbish collected from across the region. The Viridor incinerator at Trident Park, off Ocean Way, was given the go-ahead despite strong local opposition.

The Cardiff Organic Waste Treatment Project contract will be awarded in early 2014. If successful, Kelda says it will start construction in the middle of next year and start operating in early 2016. About 50 jobs will be created during construction and there will around 13 staff in the long-term, including truck drivers.