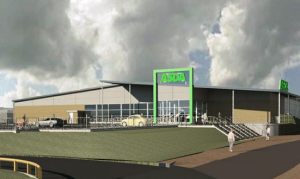 Long-awaited plans to build an Asda supermarket on a school playing field in Monmouthshire have been approved. The 2,945 square metre superstore will be built on land which forms part of Caldicot Comprehensive School's games fields. A new relief road will be built around the site to allow access to the supermarket and footpaths will also be improved to link the store with shops in the town centre. The school playing field that will be lost due to the development will be replaced by a multi-use games area and a new artificial pitch.

The council has been trying to attract a supermarket chain to the town for more than six years in a bid to regenerate the area. But the plans have previously come under fire from residents who wanted an alternative site, closer to the town centre, to be developed. Now approved, the new supermarket with a 212-space car park will be built on 1.6 hectares (4 acres) of land currently used as a school field.