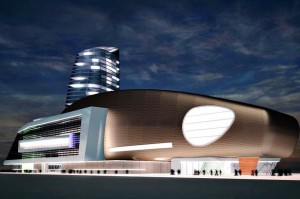 The plans for building a combined International Convention Centre (ICC) and indoor arena in Cardiff could take a step forward next month with a report recommending the project now goes to market. Cardiff Council wants to build a convention centre and indoor arena in the city as part of its vision for boosting the capital’s economy over the next 20 to 30 years. The ICC would have a 1,350 seat hall, 1,350 banqueting hall and 5,000sq m exhibition space, while Cardiff Arena would have capacity for 8,500 to 11,000 people and be designed to host both concerts and sports events.

The Labour-run council issued a green paper in March, called Rebuilding Momentum, setting out it proposals for the city including the idea of a convention centre and indoor arena. This suggested that County Hall, the council’s headquarters, could be the site for a convention centre as it could also accommodate an indoor arena. Other possible sites included Callaghan Square, Brains brewery and the Red Dragon Centre.

In a statement to last week’s council meeting, the council’s cabinet member for finance, Councillor Russell Goodway, said he now intends to seek the cabinet’s permission to go to the market with the idea. He said he intends to provide cabinet members with a report on the proposal next month to get the authority he needs to “go to the market to procure a solution”. In the statement, the councillor reported that work towards the delivery of such a development had been progressing and he said: “The September Cabinet report will include all the appropriate information necessary to enable members to decide on how they wish to take forward the procurement of this exciting project.”

Billionaire Sir Terry Matthews is also keen to develop a new dedicated convention centre as part of his Celtic Manor Resort. Sir Terry said last week that the idea of such a project was still “very early days”. A spokesman for Celtic Manor confirmed that the idea is still something Sir Terry is keen on doing, but said there are no plans in place and that he has not been in a position to move things forward.