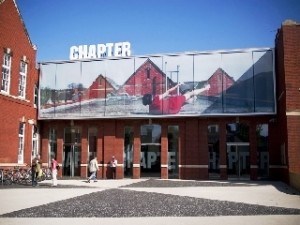 Cardiff's cultural venue Chapter Arts Centre has launched a search for a design team for a proposed £6m expansion. The popular arts centre plans to transform the eastern wing of its home in Canton with a new cinema, galleries, performance and rehearsal spaces and a digital hub. It comes five years after a successful refurbishment saw visitor numbers double, with nearly 800,000 people going through its doors every year. It is hoped that the new work at Chapter will get under way in 2015.

Chapter, which is based in the old Canton High School site off Cowbridge Road East, has formed a consortium with arts groups Earthfall, ffotogallery, Theatr Iolo as well as Cardiff University on the Arts Council of Wales-backed project. The arts centre has now launched a high-profile competition for the next £6m stage of the redevelopment. A statement said: “Chapter Capital Alliance Partnership will provide a richer artistic provision for audiences and the artistic community and will also make a significant contribution to the strategic, artistic, economic and social objectives of national and regional bodies including the Arts Council of Wales, the Welsh Government and Cardiff council.”

Nick Capaldi, Chief Executive of the Arts Council of Wales, said: “For more than 40 years Chapter has been regarded as one of the most successful multi-disciplinary arts organisations in the UK and a major centre for the contemporary arts in Europe. Not only is Chapter a much-loved community venue it’s also a home for many artists and arts organisations. Chapter plays an important part in the lives of many people and we want future generations to experience the diversity and opportunities the centre offers. With more than 750,000 visitors a year passing through its doors, along with the employment of around 110 people and a programme of over 1,000 events presented each year, it’s a cultural and business success story. This next chapter will indeed provide a richer artistic provision for all.”