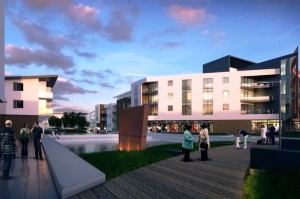 Plans to transform a 12 acre site at Newport’s Old Town Dock into a £39m mixed development have been unveiled. Developer Sennybridge is expected to start work on the project next summer. The Town Dock, as it was originally known, was built in 1842 and the reclamation of the area was one of the first projects undertaken by Newport Unlimited when it was formed in 2003. The masterplan includes new retail, leisure and office space as well as a health centre, 85 houses and 209 apartments. The scheme also features several landmark buildings, including a 10-storey tower with views across the city and the river Usk.

The proposed phasing of the scheme would see a landmark building, an initial phase of 45 apartments, two and three-bedroom houses completed in time for occupation in early 2015. It is anticipated that the full scheme will take six years to complete. Urban regeneration company Newport Unlimited commissioned initial infrastructure and landscaping work on the site in early last year, before inviting expressions of interest from developers to lead the regeneration project. The successful scheme was selected from a number of interested bidders.

The bid also includes a commitment from the developer to the funding of a community interest company that would remain in place after the scheme is built. The not-for-profit organisation would provide funding and support for social enterprises and deliver training for people living and working within the suburb. An innovative sustainable transport scheme, with a mini-fleet of electric cars for shared use by residents, will also be put in place.

Councillor John Richards, cabinet member for regeneration and development at Newport City Council said: “The redevelopment of Newport is starting to gather momentum and this news represents a positive step for this part of the city. These are exciting plans and we will be pleased to continue working with Newport Unlimited and the developers as this scheme progresses.”