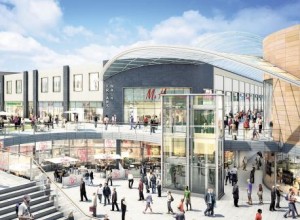 The Friars Walk scheme in the centre of Newport received a boost with the Welsh Government pledging £1.5 million to kick start the development, which will include a shopping centre, cinema, restaurant and bars. Economy minister Edwina Hart announced the cash, which will mean regeneration work, and demolition can now begin by the end of the year. Friar’s Walk will bring more than 390,000 sq ft of retail and leisure space and is expected to create more than 1,100 jobs and is expected to be complete and open by late 2015.

In partnership with Newport City Council and Newport Unlimited, developers Queensberry Real Estate has secured planning consent for a new shopping centre to be constructed in the heart of the City Centre. The scheme will include a full offer Debenhams department store, 5 major retail units, 35 retail units, a multiplex cinema, a new food quarter with 10 family restaurants, a convenience food store, a new bus station and a new 360 space car park.

Next and Topshop have recently exchanged contracts on 20,000 sq ft and 10,000 sq ft units respectively. This means both retailers will be returning to the city after closing their stores in the last two years. They join Debenhams and Cineworld who have also already committed to Friars Walk, signing up to 91,000 sq ft and 25,000 sq ft respectively.

The regeneration of Newport’s retail core is just one of a number of projects that is being facilitated by Newport City Council, in conjunction with its partners Newport Unlimited and the Welsh Government, to transform Newport into a thriving and successful city. By 2020, it is hoped that the regeneration programme will have created 12,000 new jobs, generated £800m of private investment, completed 3,000 new homes and created one million square ft of new office floor space.