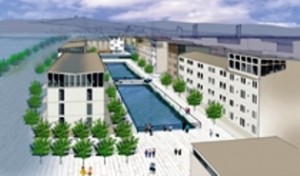 The final part of the Old Town Dock site in Newport is ready for up to £25m of mixed-use development, following a £600,000 investment from Newport Unlimited. The remaining landscaping and infrastructure work on the final 10 acres of the 45 acre site has been completed, allowing the next stage of the area’s regeneration to begin.

The reclamation of the area was one of the first projects undertaken by Newport Unlimited when it was formed in 2003. Since then, the area has been transformed with a £200m redevelopment programme, with residential developments and a riverside park.

Hamish Munro, Head of Regeneration at Newport Unlimited was confident that the scheme would now move forward, with interest already expressed by a number of developers. "The transformation of the Old Town Dock area is something of which Newport can be very proud," he said. "The area now presents a huge investment opportunity for the city. It is a prime piece of development land located on the regenerated riverfront area and there has already been keen interest expressed from a number of developers.

The Old Town Dock is just one part of a wider regeneration programme being rolled out by Newport Unlimited in conjunction with its partners, Newport City Council and the Welsh Government. By 2020, it is hoped that the regeneration programme will have created 12,000 new jobs, generated £800m of private investment, completed 3,000 new homes and created a million sq ft of new office floor space.