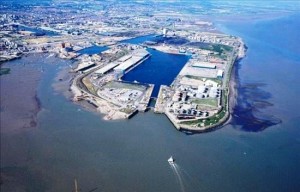 Plans have been submitted for a new distribution centre on a brownfield site at Cardiff Docks, which could create more than 100 jobs. Cardiff Docks operator Associated British Ports (ABP) has applied for permission to redevelop a former recycling centre north of Queen Alexandra Dock which has been unused for two years. The proposals include the demolition of the former Cardiff Recycling Centre on Cold Stores Road and the construction of a new distribution terminal with office space, car parking and external storage areas.

According to the planning documents, the terminal, which would be in operation 24 hours a day, would create 110 new jobs. It would be used for the storage and distribution of construction materials for South Wales and the South West of England and would not be open to the public. The 6.8-acre site has been vacant for two years. Prior to its use as a waste transfer site for commercial and industrial waste and a tyre recycling plant, the site was also used as a wood recycling and wood chip production centre.

In the planning documents, agent RPS Planning and Development said: "The proposed development involves the re-use of previously developed land within an existing employment/industrial area and in a location which is recognised as having excellent road links. The redevelopment of this brownfield site will therefore make an efficient use of the land and will facilitate further investment, development and associated job opportunities in the area."