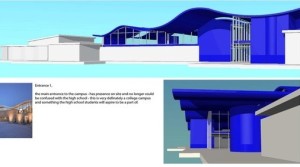 Latest plans for a new £75 million campus to replace the High School, Further Education College and Leisure Centre in Brecon have been revealed. Powys council had agreed to spend £400,000 to develop the plans and work on initial designs. The campus is planned for land near Brecon High School and building work could start as early as April 2015, the authority says. It is part of a schools modernisation project in the county. Ten schools were replaced by four new ones in the Ystradgynlais area last year and other similar projects are planned throughout Powys.

In Brecon, the county council wants to build a "learning campus" replacing the existing secondary school, Coleg Powys' building and the town's rundown leisure centre. The old buildings would be demolished and the land sold off to help pay for the new campus, the council said. But it has also applied for Welsh government 21st Century Schools funding for its "groundbreaking" proposals.