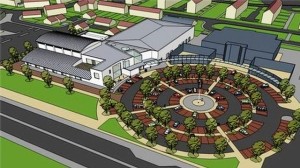 Port Talbot’s iconic lido destroyed by fire four years ago looks set to be replaced by a multi-million pound sports complex built on a neighbouring site. The move has attracted controversy with campaigners, who wanted it built on the Afan Lido's original site on Aberavon beach, but Neath Port Talbot Council has recommended the new complex is built on Hollywood Park.

The new £13.6m complex will have an eight-lane pool with boom and movable floor; learner pool, 100-seat spectator gallery and four-court sports hall with retractable seating for 100 spectators. The council's task and finish group's report says the Hollywood Park location would help with the wider regeneration of the seafront.

Neath Port Talbot Council insists a new leisure complex will be worthy of the area. Chairman Anthony Taylor said: "We believe our recommendations address the needs of local communities, complement existing sports and recreational provision while creating an environment to attract further investment to the seafront." The recommendations will go before the cabinet for decision on Wednesday.

Aberavon beach seafront development with the proposed new lido are shown in the following video: -