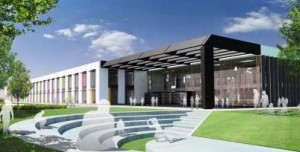 Plans were unanimously approved to build a new state-of-the-art secondary school in Caerphilly county borough last night. Called the Islwyn West proposal, the plans were looked at and approved by the council's education scrutiny committee yesterday, before going to cabinet next week and full council on July 23. If agreed by all councillors, a consultation exercise will take place in the autumn, and pupils would start moving to the new school in September 2016.

Last month it was revealed that Caerphilly Council proposed to shut Oakdale and Pontllanfraith Comprehensive Schools and build a new school at Oakdale Business Park, creating a similar-sized school to Blackwood Comprehensive and tackling surplus places. The council is already spending at least £20 million building a new Welsh-medium high school in Caerphilly, with funding from Welsh Government, as part of its £92 million 21st Century Schools programme.

Members of the committee heard from Bleddyn Hopkins, assistant director of education, who presented a report containing recommendations from a 10-member cross-party working group made up of seven Labour and three Plaid Cymru councillors. They proposed shutting both Oakdale and Pontllanfraith comprehensives to save £8 million on a 25-year backlog of required maintenance, creating two similar sized schools in Blackwood and Oakdale.

The council faces a total maintenance backlog of £140 million for all its schools, the meeting heard. The proposal will help reduce surplus places in the area known as 'Islwyn West' from 22.1% to 16.9%, the council has said.