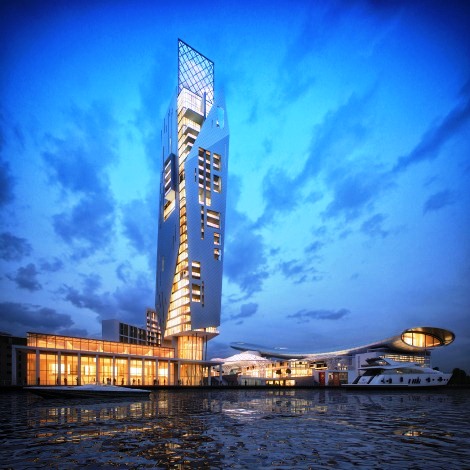 Plans to continue the transformation of Cardiff Bay with a new ice arena, winter sports village, and a new tower block which will become Wales’ tallest building have been submitted to Cardiff Council. Developer Greenbank Partnerships have submitted detailed proposals which include a new 3,000 seater dual ice rink, as part of a £200m scheme continuing the development of the Cardiff International Sport Village. The proposals also detail a 32-storey, 120m tall tower that would be 13m higher than the current tallest building in Wales – the 107m Meridian Quay in Swansea.

A bid for permission to build the rest of a mixed use waterfront development has also been submitted, including outline plans for a 150m indoor ski slope, an indoor snow play centre including toboggan runs, carting and building igloos, and a new tower containing an art gallery, hotel, and flats, which developers say would be the tallest in Wales. There is also space for further housing, offices, retail space, and a public plaza.

The details plans for the new Cardiff Ice Arena show it will contain two ice rinks – one 3,000 seater, Olympic sized rink measuring 30m by 60m for performances and ice hockey games, and a second rink measuring 56m by 26m for practice and public use. The development will also include changing facilities, skate hire and maintenance, hospitality suites, as well as two cafes and a viewing area.

Jonathan Smith, Director of Greenbank’s subsidiary company Helium Miracle 113, who are developing the scheme, said: “Cardiff has a very well patronised ice arena at the moment. Since it’s moved out of the city centre, it’s had a temporary residence long-since past its best. What we are keen on doing is building a public facility and at the same time providing an Olympic standard facility.” Mr Smith said his firm was planning to develop an art gallery on the ground floor of the tower, a hotel on some of the lower floors, residential accommodation above that, possibly office space, topped with observation deck at the top.

Cardiff Devils Chief Executive Paul Ragan said: "We are very excited about it - I will be even more excited when I see somebody with a spade in their hands - and we are still on target for it to be ready in time for the start of the 2014 season. It's fantastic for our city, our sport and for ice sports in general. It's also providing Cardiff with a 3,000 seat indoor arena that could be used for other sports as all they would have to do is drop wooden flooring over the ice."

Mr Ragan said the Devils' current arena, known as the "Big Blue Tent", was restricting ice hockey from growing in popularity in Cardiff. He said the surrounding housing and leisure developments at Cardiff Pointe would increase football and make the new arena a focal point in the city. It is hoped that work on the arena, which will become the new home of the Cardiff Devils, will begin in June 2013, and be completed by 2017.