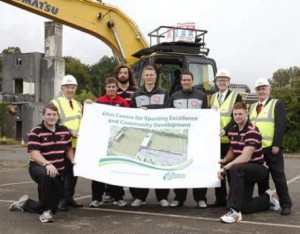 Clearance works on the site of the old Ystrad Mynach Hospital have started to make way for the state-of-the-art facility for football and rugby which will boast two 3rd Generation (3G) artificial playing surfaces. The Caerphilly County Borough Council facility will have the pitches, lighting, stands, terracing and car parking constructed to the highest standards to meet the exacting requirements of each sporting body involved.

Welsh rugby star Leigh Halfpenny attended the demolition of a hospital, which will make way for a £6m centre for sporting excellence. He joined representatives from Newport Gwent Dragons, Cardiff City Football Club and the Welsh Rugby Union along with the Leader of Caerphilly County Borough Council, Cllr Harry Andrews to mark the special occasion. "It’s great to see demolition work start on the site and we now look forward to the development taking shape," said Cllr Harry Andrew.

WRU Head of Rugby Joe Lydon said, "We applaud Caerphilly Council’s proactive initiative in creating this facility which will greatly enhance the development of elite sports men and women in the area, which will be of great benefit to the local community, the Dragons region, and to Wales."

The facility will offer the possibility of matches at the highest level being played together with high class performance training and sport science facilities. It will provide many of the training requirements of elite sportsmen and women in one single venue but it will also be used by the whole community – enjoyed by people of all ages and abilities.