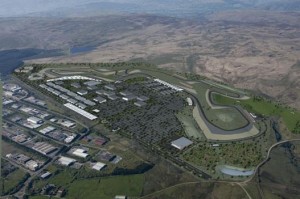 Spanish giant FCC Construccion and local Abergavenny civil engineer Alun Griffiths (Contractors) Ltd have been selected to build a new £250m motor racing circuit in Ebbw Vale in Wales. The Circuit of Wales scheme is backed by the Heads of the Valleys Development Company and is set to transform the landscape of Rassau and bring 9,000 jobs. Construction work is expected to be technically challenging with the circuit built on a mountain-top site covering 830 acres of land in Blaenau, Gwent. The development will include a 3.5-mile long racetrack, an international kart track and motocross tracks, together with a technology park adjacent to the circuit.

The deal is another coup for FCC who have ambitious expansion plans in the UK. FCC Construccion's previous projects include the Madrid-Barajas Airport, one of the world's busiest airports, and the Circuit of Jerez in Andalusia, Spain, which is a particularly popular circuit among racing fans and riders. Rafael Foulquie, UK Managing Director for FCC said “This project signifies a remarkable milestone within the company’s international development and reinforces our vision of the UK as our main target. It’s a great opportunity for FCC to get established in Wales, promote local employment and work closely with local communities.”

Martyn Evans, director of Alun Griffiths (Contractors) Ltd, which helped build the Celtic Manor Resort's 2010 Ryder Cup course and helped reopen the Ebbw Valley railway line, said it was a huge honour to be involved. He said: "This is the sort of project that will change lives in Blaenau Gwent, as well as people's perception of the area. We're thrilled to be a part of it."

Heads of the Valleys Development Company Chief Executive Michael Carrick said “The people of Wales, and Blaenau Gwent in particular, should be really excited about what will be built. Having seen the work that our construction partners have done in the past, I've no doubt that the Circuit of Wales will be a diamond in the British sporting landscape. We chose these companies because of their vast experience, global renown and because of the superb team they can put in place. A promise has been made by both firms that a significant number of construction jobs will go to local workers, which would provide a much-needed boost for the area where unemployment rates are high."

A planning application for the scheme, which will include a 3.5 mile race track, karting and motocross tracks, a race academy and technology park, is expected in November.