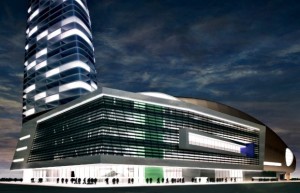 First designs for a £90m Cardiff convention centre have been unveiled. Holder Mathias Architects, which has offices in Cardiff and London, said it has developed the designs on behalf of Aviva Investors. The plans include 5,000 square metres of exhibition space, a suite of meeting rooms, a 2,000-seat banqueting suite, a 2,000-seat auditorium and a 400-bed hotel.

Aviva Investors, a global asset management company which has seen through a successful office development around the Wales Millennium Centre, said it did not want to comment about its proposal at this stage. Cardiff Council and the Welsh Government are assessing a number of potential locations for a convention centre, including Callaghan Square in the centre of Cardiff.

Cardiff council is continuing talks with the Welsh Government over realising both a convention centre and indoor arena in the city. If it doesn't get funding agreement from the Welsh Government it could look to finance both projects – with backing from the private sector – through local authority borrowing powers.

However, with Cardiff council having abandoned plans to acquire land yet to be developed at Callaghan Square from MEPC, it is understood the Welsh Government is now close to signing off on a deal to acquire the land itself, giving it control over the future development of the site.