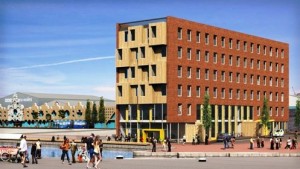 Final designs have been approved for a new £6m centre for the creative industries in the heart of Cardiff Bay. Construction is anticipated to commence in December 2012 and the main contract completed by January 2014, with the centre opening for business in June 2014.The 40,000sqft centre will be one of the centerpieces at Porth Teigr, which together with BBC Cymru Wales Roath Lock studios; will form a hub for Wales’ dynamic creative industries sector. Designed by Ash Sakula Architects, the building will incorporate a range of environmentally friendly features.

Porth Teigr is a 38-acre mixed use, sustainable development project in Cardiff Bay, a joint venture between Igloo (an Aviva Investors fund) and the Welsh Government. The centerpiece of the development is the 170,000sqft drama production studio complex being leased by BBC Cymru Wales, Roath Lock studios, which are home to flagship BBC programmes including Doctor Who, Casualty, the Welsh-language drama Pobol y Cwm and children’s drama Wizards vs Aliens. Porth Teigr is also home to visitor attractions World of Boats and the Doctor Who Experience.

The Welsh Government is close to awarding the construction contract for the site, and business minister Edwina Hart said she was pleased the development was progressing. “Wales has a strong and diverse creative industries sector which has been identified as one of our strategically important economic sectors with high growth potential,” she said. “I am pleased the Welsh Government is supporting this latest development which has the potential to act as a catalyst to create a strong sector cluster in Porth Teigr.”

Mark Hallett, Development Director at Igloo, the developers behind Porth Teigr, said “Our vision for Porth Teigr is to develop a ‘hub’ for the creative industries. The new centre will be a crucial part of this by providing opportunities for businesses and individuals within this growing sector.”

Mark Sutton, associate at Knight Frank, agents for the building, added: “The new centre for creative industries will be the first building at Porth Teigr to deliver office space to the market. The six-storey building will be located directly opposite the BBC studios, overlooking the waterfront and will be flexible to accommodate a number of SMEs or a single occupier with the capacity to accommodate up to 300 staff.”