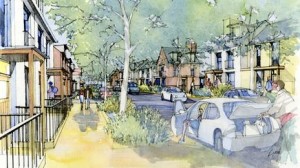 Plans for a £100m housing development which would see up to 750 homes built on the site of the Ely old paper mill in Cardiff have been approved. The 53 acre Mill Development has a target of including at least 60% affordable homes with a mixture of apartments and houses, along with a neighborhood centre for shops and services. House building is scheduled to start shortly with the entire development being complete by 2017.

Funding for the scheme, where Arjo Wiggins paper mill once stood, is coming from the Welsh government and Principality Building Society. The project is being led by the Ely Bridge Development Company. The plans include a new riverside park, the completion of the Ely Trail cycle path, and the decontamination of a large vacant site in central Cardiff. The affordable housing will be managed by a community-based housing association.