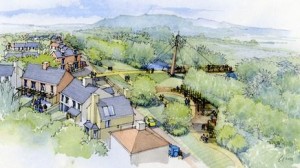 Artist's impressions have been released of a proposed £100 million affordable housing development on the site of a former paper mill in Cardiff. More than 700 homes could be built on the 53-acre Arjo Wiggins site in Ely which been derelict more than a decade. The designs show views of the green streets, residential mews and the proposed new footbridge linking the riverside park with Caerau.

The project is being put forward by a not-for-profit social enterprise created by the Welsh Government and the Principality Building Society. The Mill development has a target of including at least 60% affordable homes with a mixture of apartments and houses, along with a neighbourhood centre for shops and services.

David Ward, Chief Executive of The Mill, said: "The artist's impressions illustrate what we believe will be an exciting addition to the city centre landscape, providing vital homes that will be accessible to young working people currently struggling to get on the housing ladder. Residents will enjoy high standards of living within a well-managed and maintained environment bringing something of the beauty of the Welsh landscape to the heart of the city."

The company has recently held a series of briefing days in the local community and describe initial responses as "extremely positive". Applications for remediation and development of the land are still to be approved but it is expected that work will begin on clearing the site in November with the first homes available at the end of 2013.