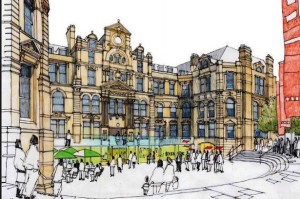 Cardiff Council has unveiled rescue plans to transform the Coal Exchange into a business hub just weeks after the Coal Exchange was suddenly closed over safety fears. Cardiff Council has revealed it is considering acquiring the iconic 127-year-old building so that one of Wales' most important buildings could be brought into public ownership and transformed into a centre for business innovation under new plans to save it from dereliction.

If the council is able to secure the building’s freehold, it hopes to attract private and public sector investment to fund the redevelopment, believed to be worth £25m to £40m. A 1,300-seat banqueting hall, restored exchange hall, public square, office space and “innovation centre” are proposed in the Labour administration’s vision. It wants the Coal Exchange, once the headquarters of the coal industry, to be a “new home for business and enterprise in Cardiff” and spearhead the wider redevelopment of Mount Stuart Square in Butetown.

The 140,000sq ft building, owned by developers Macob Exchange Ltd, was closed in May after a prohibition order was served over fire safety concerns. Macob has planning permission for a £20m scheme to turn it into apartments, restaurants and office space, but the plans have never gone ahead.