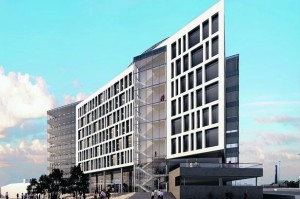 A massive regeneration of the area around Cardiff Central station has taken a major leap forward after the council struck multi-million pound deals to buy neighbouring land and buildings. Cardiff Council, following months of negotiations, has bought St David’s House and Marland House next to the rail and bus stations. The deals could pave the way for a revamped “capital city gateway”, replacing an area that has long been considered an eyesore with up to one million square feet of new “office, residential and leisure space”. Developers hope the first new landmark building could be completed by the spring of 2015.

Chief Executive of Cardiff-based Rightacres Property, Paul McCarthy, who has been working with the council on the deal, said the new development would be mainly offices buildings, but could also include new homes. “This is the most exciting phase in the story of Cardiff post-Cardiff Bay, Callaghan Square and the St David’s Shopping Centre,” he said. “It also represents the next major piece of the jigsaw in the development of the city centre. It is now important that all stakeholders, Cardiff council the Welsh Government and ourselves as developers, work together to make it happen.”

As well as the two buildings, the council has also bought a parcel of vacant land on Park Street next to the offices of Media Wales, publisher of WalesOnline. The vacant land was previously home to Thomson House, the former home of Media Wales. The cost of buying the long-term leasehold interests and land has not been disclosed, but is understood to be in region of £20m. The deal is being financed from a £48m capital budget ring-fenced by the council to support the development of the Welsh Government’s financial and professional services enterprise zones.

The scheme, which has a working title of Capital Square, is located at the very heart of the enterprise zone. Cardiff council has entered into an agreement with Rightacres to build the scheme, which could see between 750,000 and one million square feet of new building. Work will now start on a detailed masterplan for the project. Under the agreement, Rightacres has up to four years to bring developments forward. The scheme could create as many as 1,000 jobs.