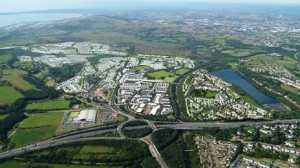 Construction is beginning of a housing estate which forms part of one of the biggest regeneration schemes in Wales. Developers St Modwen say it is a significant step forward for the £1.2bn Coed Darcy community near Neath, where 4,000 homes will be built on the site of a former BP oil refinery. St Modwen said the work will provide about 880 local jobs, resulting in a new community of 10,000 people.

Sixty homes have already been built, but on Monday work will begin on Coed Darcy's main site which initially will be made up of 302 homes. A range of homes, townhouses and flats will form the first of three residential neighbourhoods planned at Coed Darcy with the first of the homes expected to be for sale in December, St Modwen said.

Coed Darcy, which is supported by Prince Charles through his Prince's Trust Foundation, will also have four schools, community, leisure and recreational facilities. Work is also nearing completion on a £3m infrastructure programme - including a road linking the community to the M4. St Modwen said the improved access is also set to benefit more than 100 tenants already working in the business park built for the project.

Ali Thomas, leader of Neath Port Talbot council, said "The start of works on the new phase of housing is a very positive development for Coed Darcy. This is a key regeneration scheme for Neath Port Talbot, set to deliver thousands of homes, new community facilities and local jobs. It will eventually be home to more than 10,000 residents and will also create more than 4,000 new jobs to support the local economy.”

BBC Wales business correspondent Nick Servini said Coed Darcy will provide a much-needed boost for the construction industry. Latest figures show house building rates are down 12% from a year ago. Rupert Joseland, Regional Director for St Modwen, said "Coed Darcy is a flagship development for us and a significant regeneration project for Wales.

Andrew Compton, Director of house builder Persimmon which is working with St Modwen, said the company was setting up an office in Swansea to expand its operations in west Wales. "Coed Darcy is one of several new projects to commence in west Wales in the next few months, all of which will not only provide new homes but a boost to the local economy and thousands of new jobs over the new few years" he said.