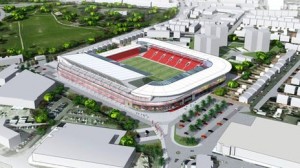 Bristol City FC has unveiled a plan 'B' to redevelop Ashton Gate Stadium if it cannot get planning permission to move. The club's plans for the current ground mean an estimated £40m would be ploughed into turning it into a 26,000-seat venue including corporate boxes. But at the same time, the club has stressed it intends to continue the fight to build a new ground at nearby Ashton Vale.

An inquiry into plans for a move to Ashton Vale will reopen in October. The club intends to submit a formal planning application to Bristol City Council in June or July. If permission is granted the newly revamped ground could be finished ready for the 2016/17 season.

Meanwhile, Bristol Rugby Club Chairman Chris Booy confirmed it would be sharing a ground with the football club, whichever stadium gets built. He said "It makes tremendous economic sense and allows us to invest more money in the football and rugby clubs."

Bristol City has previously said the Ashton Gate site is too small to fit its plans. But Managing Director Jon Lansdown said demolishing the Hirerite site next to Ashton Gate and getting rid of the temporary huts alongside the Williams stand would free up more space. He said "Ashton Vale has always been our Plan A but whatever happens, within three to four years we do need to improve our facilities to compete so we need to look at alternatives."

Bristol Mayor George Ferguson has already backed the new plan. Mr Ferguson said "We must now pull out all the stops to work closely with the club to take these plans through planning so that this long-running issue can be resolved once and for all whatever the outcome of the Ashton Vale legal process." He said he also supported the club's desire added for a new Ashton Gate railway station to coincide with the development.