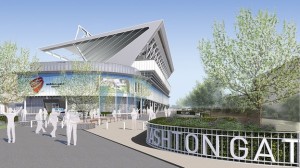 Bristol City FC's £40m redevelopment plans of Ashton Gate Stadium have been recommended for approval by Bristol City Council's planning committee. Bristol Sport Ltd wants to replace two of the ground's stands to increase its capacity. It plans to redevelop Ashton Gate as an alternative to building a new ground at nearby Ashton Vale. It will go before a council vote on 27 November. If approved, the revamp will increase capacity from 21,500 to 27,000 and could be finished in time for the 2016-17 season.

Once a decision has been made the club said it would decide whether to pursue its alternative option to build an entirely new £60m stadium at a new site in Aston Vale or expand the Ashton Gate football ground. The £40m plan to redevelop the existing stadium would involve replacing the Williams and Wedlock stands to increase its capacity from 21,500 to 27,000 in stages over the next three years.

Alongside the stadium the club also intends to build a new conference, exhibition and entertainment centre for the city. The newly-redeveloped stadium would be used by both Bristol City FC and Bristol Rugby Club, both run by Bristol Sport Ltd.

A Bristol Sport Limited club spokesman said: “While the recommendation for approval is very welcome and a significant step forward in the overall process, it is also essential that the basis on which any planning is granted must be implementable and financially viable. At the conclusion of this planning process the Board of Bristol City Football Club will be in a position to make a considered choice between stadium construction at either Ashton Gate or Ashton Vale.”