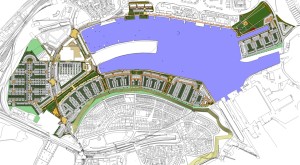 Work is due to begin on a £230m project to regenerate Barry Island. The plans include a new £5m link road from Barry town centre to Barry Island, a new primary school, hotel, supermarket and community facility, a waterfront district centre featuring cafés and restaurants, as well as up to 2,000 new homes, comprising a mix of private and affordable housing. The scheme, known as The Quays, aims to create a sustainable mixed-use community focused around the water, with new parks and children’s play areas, waterfront promenades and public spaces to help connect the existing communities of Barry Island and Barry town. WRW Construction Limited will carry out the work which is due to be completed around next March.

Barry Island has been popular with tourists for about 150 years. At its peak in 1934, 400,000 people visited during the August bank holiday weekend. A Butlins holiday camp opened in 1966, closing in 1996. But Barry Island gained new fame when it featured in the BBC TV comedy Gavin and Stacey. Despite housing being built on part of the site, the Nell's Point headland has remained largely undeveloped since the holiday camp was demolished in 1997. The council hopes the regeneration at Eastern Promenade will mean more interest in the site.

"The council is marketing the Nell's Point site until January 2014 and regeneration of the nearby Eastern Promenade should help generate further interest from developers," said Vale of Glamorgan council leader Neil Moore. "We believe this is the beginning of a great future for Barry Island and we are looking forward to seeing the work start. We are committed to improving the visitor experience at the Island and the work on the Eastern Promenade is an example of how we're improving the resort for the benefit of the town and the Vale as a whole."