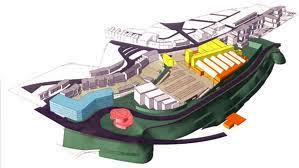 Caerphilly County Borough Council has agreed plans to fund a £5 million cinema and associated restaurant units as part of the Retail Development Plateau proposals. The Council is proposing to construct the cinema on the 0.27 Hectare (Ha) site and lease it to a commercial cinema operator.  There is currently no multiplex cinema within the county borough and a new cinema will serve communities within the wider area.  To complement the cinema development there are proposals for further units including restaurants, cafes and car parking.

Councillor Ron Davies, cabinet member for regeneration, said: “We are delighted to announce these ambitious plans to fund a new cinema for Bargoed. These proposals clearly demonstrate our commitment to regenerating Bargoed, but the development will also serve the whole county borough as we do not currently have a multiplex cinema within this area.

“This is a huge vote of confidence for the future of the town and will help transform the fortunes of this strategic retail destination. Things are definitely looking up for Bargoed and I’m sure the residents and retailers will join us in welcoming these fantastic plans.”

The council has decided to build the cinema itself on the Bargoed retail plateau site and lease it to a national cinema chain after advice from commercial property experts. The cinema is the second phase of the development, with supermarket Morrisons due to open as part of phase one. Work on the Morrisons development is due to start soon with planned completion in Autumn 2013.