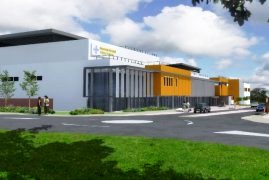 BAM Construct UK has been signed to build a £40m extension to Morriston Hospital in Swansea. BAM will deliver the 13,000 sq m new building for Abertawe Bro Morgannwg University Health Board. The three-storey extension will house renal dialysis, dental and x-ray departments as well as housing an education centre to train Health Board staff including post and undergraduate doctors. Completion is scheduled for autumn 2014.

The scheme is aimed towards a BREEAM Excellent rating, with features including photovoltaic cells on the roof, use of combined heat and power and modular services installation. Project manager Andrew Cavil said: “Not only will this scheme provide better facilities for patients; it will deliver improved facilities for the training of doctors, as well as creating job opportunities and boosting the local economy.”

The Morriston scheme was procured via the Welsh Health Estate Designed for Life Framework. BAM has completed more than £300m of projects under the framework, representing around 40% of the awards. Its previous schemes include Ysbyty Ystrad Fawr in Caerphilly and Ysbyty Aneurin Bevan in Ebbw Vale.

BAM has committed to providing a number of apprenticeships and work experience placements on the project, which is included in the company’s bid for national skills academy status.