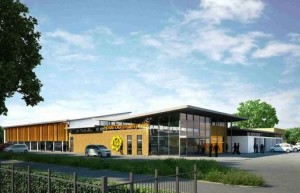 Plans for a £9m new community hub building to replace Splott Pool have been proposed by Cardiff Council. The new building on the site of Splott Pool would have a new swimming pool, library, gym, and other services. The Star Centre on Splott Road would also be demolished, its services transferred to the new hub, and the site replaced with housing. If approved next week, the existing Splott Pool could close in the next few months to allow the site to be cleared in preparation for building work to start in early 2015. The new hub is expected to open in early 2016.

Cardiff council outlined its proposals for the future of the Splott Pool site and released artist’s impressions of what a new building there could look like. This would involve demolishing Splott Pool and replacing it with a new community hub building offering a new pool and advice and information services on the same site. A consultation on the proposals was carried out last year. Now the council has outlined its vision for the Splott Pool site which it said would be “state-of-the-art” and energy efficient.

The multi-million pound building would house not just a new pool but an open plan library and services such as housing and benefit advice and support for people getting into work. It could also be used by partners such as the Citizens’ Advice Bureau and Communities First and would have a community hall, community cafe, changing facilities, gym, fitness suites, meeting spaces and training rooms.