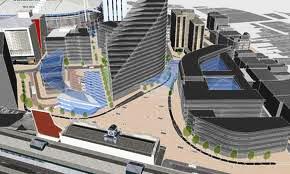 Cardiff Council and the Welsh Government are in discussions over final location and the funding arrangements for a dedicated International Conference and Convention Centre (ICCC) in the capital – which would provide a major economic boost for the capital. The centre will have a potential capacity for 2,000 delegates and be able to host major UK and international conferences on a regular basis, bringing an estimated £46m per year into the local economy.

Cardiff Council has for a number of years been trying to realise a convention centre for the city – which is being supported by business organisations as well as retailers, leisure operators and hoteliers in the capital. A number of city centre sites for the convention centre are being considered around Cardiff Central Station including undeveloped land at the MEPC-owned Callaghan Square scheme, as well as currently partly occupied land around Herbert Street.

Discussions are continuing between the Welsh Government and Cardiff Council on the precise funding model for the centre, which would also benefit from investment due to its location within the enterprise zone for financial and professional services. Seen as a key infrastructure investment, an element of funding could come from borrowings via the UK Treasury’s Public Works Loan Board.

Cardiff Council could also seek to secure funding via tax increment financing. An element could also come from the Welsh Government’s capital budget. Whatever the final funding solution, it would not require any private sector backing. While being publicly-owned the convention could be operated by a private company, or through a public-private entity.

Cardiff & Co, a public-private partnership set up to promote the capital city and its region, said the Council clearly recognises this is a positive investment in the long term and added that the locations being considered are perfect, right in the heart of the central ‘business district'. An announcement on the convention centre locality is expected in the autumn.