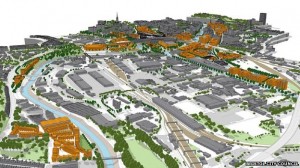 A 12,000-seater music venue on the Temple Meads Enterprise Zone in Bristol is possible by 2016, the council says. Several plans for an entertainment arena have been put forward since 2003 but the idea was dropped in 2007 when costs rose to £86m. Then in 2009, plans for a 15,000-seater music and sport venue were proposed with a second site at Ashton Vale close to where Bristol City Football Club wants to build a new stadium.

Bristol City Council leader Lib Dem Simon Cook will tell a conference an arena on the site of the old diesel depot site is a crucial part of the zone. He stressed although it was early days potential operators believe its size would attract many good quality shows.

Mr Cook said there was a risk a larger version would be built in Cardiff if the Bristol arena did not go ahead. "We've fallen behind Cardiff too often in the past. It is really time to grab the opportunity and go for it. There is a very big interest in an arena for Bristol... we're absolutely determined to deliver it," he added.

It is believed the arena would cost up to £80m to build, some of which will come from the government's City Deal fund. The city's biggest music venue is the famous Colston Hall, which can hold about 2,000 people.