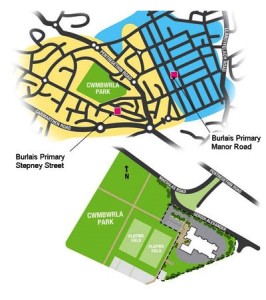 Plans to create a new £7.5m state-of-the-art school in north Swansea have been proposed. If approved, Burlais Primary School will occupy almost half of Cwmbwrla Park. Swansea Council submitted a proposal to its planning department to establish Burlais Primary School in the eastern part of the park, with architects' practice Stride Treglown Architects acting as agent. The plans are the latest phase of Swansea Council's on-going Quality in Education (QEd) 2020 programme which has seen a number of new school builds in Swansea proposed recently.

The proposal involves 37,838 sq ft of internal floor space, and would house 89 members of staff, of which 66 would be on the teaching side. It envisages building a predominantly two-storey school for 525 pupils. There would also be a nursery with room for 75 children and a 27-place specialist teaching facility. In addition, there would be hard-standing play areas, two games courts and a new car park.

In the design and access statement accompanying the application, Stride Treglown said: "The proposed development will replace outdated existing school buildings at two sites and provide a new flagship, sustainable primary school for the community. The development will improve an essential service for the area and create a new focus for the local community. It will provide a landmark building which will regenerate the site and enhance teaching and learning."