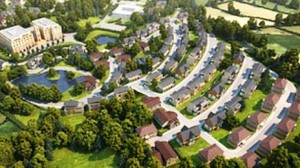 The company behind plans for an international holiday resort in Carmarthenshire says it hopes to submit new proposals next year. Maxhard Ltd was forced to rethink its project for a tourist village near Llandeilo after an independent report criticised its "inappropriate" design. The China-based firm said it was committed to the scheme, which includes 80 timeshare homes and a luxury hotel. The revised plans are expected to be submitted in early June next year.

Maxhard wants to build a hotel, incorporating an existing Grade II-listed tower, with restaurant, swimming pool, gym and other facilities. The proposals also include 80 new timeshare houses within the grounds. The development at Pantglas Hall would be close to an existing separate resort which features timeshare log cabins, a restaurant and leisure facilities. It is hoped the new scheme would attract 20,000 international tourists, particularly Chinese visitors, each year.

Maxhard architect Julian Castle said "We've had a dialogue with the planners at Carmarthenshire Council and they've been very helpful. The size and the density have been the problem so we're looking at slightly smaller houses and a more relaxed environment. They've given us some direction and we're modifying the plans." He said it was not possible to submit the revised plans to the council any earlier because an ecology survey was required which could not be carried out before April.

The original plans were criticised by the Design Commission for Wales, set up by the Welsh Government 10 years ago to champion good design, which described them as "disparate and bland" with "rootless architectural language". Mr Castle said the main issue had been the design of the houses but the revised plans would take the criticism into account. He said the resort would also have a more "natural feel" making use of timber and local materials such as slate.

He added that if all went to plan, it would be completed by 2016 "at the very earliest". Graham Noakes, Senior Development Management Officer at Carmarthenshire Council, said "The application has been held in abeyance for some time now while an amended scheme/proposal is prepared for submission. Maxhard confirmed recently that the new scheme is being progressed and shall be submitted in due course."