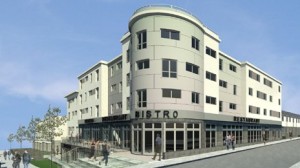 Aberdare Demolition is now able to restart demolition work this week on a £5.4m housing and shopping complex in Barry, Wales which was halted for a month by breeding seagulls. Demolition of the former Barry Magistrate’s Court was suspended last month to allow seagull chicks to fledge their nests on the roof. A Vale of Glamorgan council ecologist has now ruled that the young birds, while still visible on the building, are now capable of avoiding contractors.

The project represents a £5.4 million investment in the regeneration of Barry town centre and is funded with Welsh Government Grant and private finance secured by Newydd. Fifty two houses, flats and shops are being built on the site where Aberdare Demolition is now back at work after originally starting the job in May. Gulls are a protected species and it is illegal to harm the birds, their nests, chicks or eggs.

Chief Executive for Newydd Housing Association  Paul Roberts said: “We would like to thank Aberdare Demolition for securing the site and monitoring the birds over the last few weeks whilst demolition was at a standstill. We would also like to thank local residents for also monitoring the site for us and informing us of any seagull sightings. We look forward to the construction of these new affordable homes and will continue to inform residents of progress on the site.”