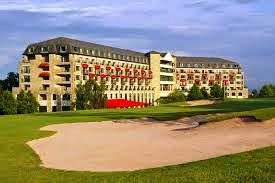 Entrepreneur Sir Terry Matthews has confirmed plans for a state of the art convention centre to be built at his Celtic Manor Resort in Newport. In a further boost the Welsh Government will provide match funding for the initial design and planning stage of the proposed Wales International Convention Centre which could have capacity for around 4,000 delegates and will also aim to attract UK party political conferences. The proposed state of the art facility is estimated will cost between £40m to £60m. Proposals for the Wales International Convention Centre project at Celtic Manor have been confirmed today by Sir Terry and Business Minister Edwina Hart.

Match funding, understood to be around £500,000, will be provided by the Welsh Government to allow Celtic Manor management to bring forward designs and submit the scheme for outline planning consent next year. The project would be the largest convention facility of its kind in Wales or the south west of England. Each year the Celtic Manor is forced to turn away around £100m in business as it cannot accommodate demand to stage larger conferences.

During the construction phase alone the centre, subject to full planning consent, would injection £50m into the local economy. It will have an economic impact for the hinterland of £70m a year. However, when completed it would provide a far bigger economic boost – particularly in providing much needed new business for hotels across the city region. It could also provide a significant boost to Cardiff Airport.

The convention centre will be an extension on the existing conference facilities at the resort. The centre will incorporate the latest technology and will have a 'dynamic' floor design, so enabling it to be configured to the requirements of conference organisers. Construction could start soon after the resort stages the NATO summit next year – which would see a completion date in 2016.