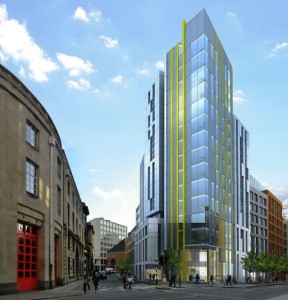 The Watkin Jones Group has gained planning permission to turn the site of a former police headquarters in Bristol into a £30m student accommodation block. The former New Bridewell Police HQ will be demolished later this year to make way for 499 beds of purpose built student accommodation and approximately 6,500 sq ft of commercial floor space at ground floor level. It is expected that the project will be completed for the scheme to be open for the 2016/ 17 academic year.

The development also provides the removal of the concrete overhead walkway on Nelson Street, the creation of a new public square and ground level walkway between Nelson Street and Rupert Street, as well as a variety of other public realm enhancements. Watkins Jones is also developing the former Magistrates Court in the area into student accommodation.

Iain Smith, Planning Director at the Watkin Jones Group said: “We are delighted with the decision from Councillors at Bristol City Council to support the redevelopment of the New Bridewell site. Together with our Magistrates Court development, which is already on site following determination at committee last April, the two developments will provide a substantial enhancement to, and investment within, the Nelson Street area.”