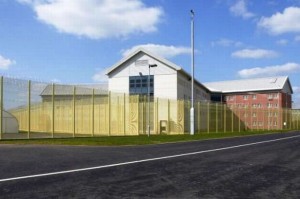 The location for north Wales' new super prison has been announced by the Ministry of Justice. Welsh government-owned former Firestone site on the Wrexham Industrial Estate will be where the £250m jail will be built, creating 1,000 jobs. The jail is should be built by 2017 and worth £23m a year to the local economy. Officials have estimated that the new jail will eventually save taxpayers £20m a year.

Secretary of State for Justice Chris Grayling said: "I can today announce that, following the assessment of several site options and subject to local planning approval, the new prison will be built on the former Firestone site in Wrexham. Work will begin on-site next summer with the prison fully operational by late 2017. The new prison will provide up to 1,000 much-needed jobs, great opportunities for local businesses and millions of pounds worth of construction opportunities.

The jail will be Category C, for inmates who cannot be trusted in open conditions but who do not have the resources and will to make a determined escape attempt. Locations in London and North West England, including Cumbria, were also in the running for a jail. But Wrexham's campaign to host the prison with the backing of other local councils in the region, paid off in June when the town was chosen.     The investment has been welcomed by the Welsh Government in the past, saying: “We have supported the proposal for a new prison in North Wales for many years. We are pleased that the benefits of locating a prison in North Wales have now been recognised by the UK Government. The prison will bring considerable opportunities for the region, contributing millions of pounds to the local economy every year, and creating around 1,000 jobs. The construction of the prison in North Wales will also provide a major boost to the construction sector and create opportunities for local businesses throughout the supply chain.”