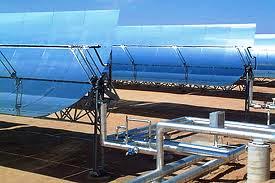 A partnership including Bangor and Glyndwr (Wrexham) Universities and Tata Steel is spearheading an initiative aimed at taking advantage of large properties by integrating new technologies into roofs and walls to generate and store clean renewable energy. They say Wales is on the threshold of a £1billion global renewables industry if it capitalises on the structural mass of supermarkets, retail outlets and industrial parks.

The pilot unit at SPECIFIC, the Innovation and Knowledge Centre (IKC), led by Swansea University, will develop functional coated steel and glass products to incorporate into existing and new buildings, enabling walls and roofs to generate, store and release energy.

Dr Peter Holliman, Head of Chemistry at Bangor University, has been working on the PVA (Photovoltaic Accelerator) side of the SPECIFIC project. He said “ We've been working on low cost PVs, increasing the amount of light we capture as well as the processing and manufacturing to make them at lower temperatures. We have been able to use cheaper substrates and save energy, reduce processing time from overnight to a few minutes. What’s great about SPECIFIC is that is gives us the opportunity to take it out of the lab and into a real production line; that’s the benefit of bringing partners together.”

Kevin Bygate, Chief Executive of SPECIFIC, added “What we are achieving at the Baglan Bay Innovation and Knowledge Centre is of global significance. It has the potential to create a range of renewable energy applications which will be available commercially within a few years. The funding secured to date and the unique collaboration between government, academia and industry has enabled us to make rapid progress within a relatively short timescale. We are delighted to be launching this pilot manufacturing facility today which will pave the way for rapid commercialisation and the creation of a major UK industry.”

This ease of use will help address a widely-predicted global shortage of energy supply, providing building owners and occupiers with a reliable energy source at point of use. And, as these technologies are developed into commercially viable products, the market demand will lead to jobs being created in the supply chain (downstream from manufacture) – as there will be a need for people to install and maintain them over the lifetime of each product.

As this will be a new industry, new jobs will be created and the engineers will need to have green energy skills, according to SPECIFIC. They will probably already live in the local area and be able to service local demand, which bodes well for areas of Wales.

Professor Dave Worsley, Research Director at Glyndwr University, said the project could have a massive effect on the region and the future of green energy. He said “We have to come up with ways to trap solar energy and then release it in low energy form. If you think of the size of the average superstore and how many there are. “There are thousands of square metres of buildings out there just keeping the rain out. Imagine if we had the whole surface generating solar energy.”