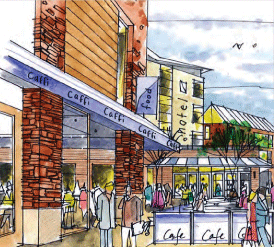 Rhondda Cynon Taf Council will decide tomorrow whether or not to approve a £200m development which would see the creation of an eight-screen cinema, an 80-bed hotel, a large shopping complex, houses, office space, a petrol station and a Sainsbury’s supermarket. The New Town Centre is a £200 million regeneration project that will create a new town centre for the communities of Llantrisant, Talbot Green, Pontyclun and surrounding villages.

The proposal includes plans for a department store, a major new supermarket and 40 shops suitable for ‘high street’ brands. A leisure and entertainment quarter will contain a multi-screen cinema as well as cafes, restaurants, bars and hotels. In addition, there will be office space for local businesses, a range of civic and community facilities, residential apartments and town houses.

The applicant, Talbot Green Developments Ltd, says the project will be a great boost to the economy, bring thousands of jobs to the region and create a flagship destination for South Wales shoppers. If given the green light, the former Purolite and Staedtler site, together with the current Leekes department store and an area of land on Pant Marsh, would be transformed into a large leisure and retail facility to rival the likes of Bridgend Designer Outlet.

As part of the proposal Leekes store will relocate to a purpose designed building on another part of the site. Emma Leeke, Managing Director of Leekes, said “This ambitious redevelopment will include the construction of a brand new Leekes store very near to our existing site. This modern building will act as our flagship home store and will include new innovative ranges and products. A new town centre will be fantastic for local residents and businesses, and is sure to attract people from further afield too. We look forward to working closely with the developer and council in progressing the project.”