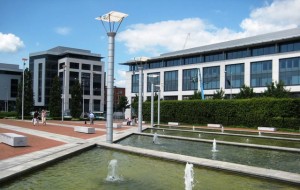 Balfour Beatty has been awarded a £17m contract for a new office building in Cardiff by the Welsh Government. The offices are to be built on the Callaghan Square site which the government bought from developer MEPC for £7.2m earlier this year. Balfour Beatty will now start to design and build the first 90,000 sq ft office scheme on the land. The Welsh Government is also pressing ahead with building plans to create a business district at the central city site and will commission a second building when the project is completed.

Last year the Welsh Government acquired another 80,000 sq ft building, currently under construction, at the nearby Capital Quarter scheme owned by local developer JR Smart. On completion JR Smart is contracted to build another office scheme of similar size. Cardiff Council had been in negotiations with the Welsh Government to use the Callaghan Square site to build a new council headquarters, a convention centre, and an indoor arena. However it looks likely that the council will have to find another location.