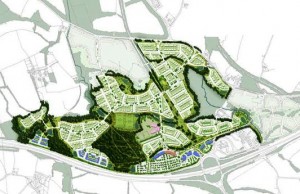 Persimmon Homes has submitted an outline planning application for a new 1,500 home community north of the M4. Land to the north of junction 33 of the M4 is proposed to build the development set along the Coed Gwernybwlau woodland. Plans include a combined two-form entry primary school and community centre, a mix of houses, apartments and some sheltered accommodation for the elderly and a new park and ride facility with 1,000 spaces as well as providing links to the Welsh Government’s proposed Metro.

Also proposed are a local centre created for the new community which could contain a mix of shops, food and drink outlets, a clinic or surgery, new offices, workshops, factories and warehouses. Open space has been included in the plans, such as Hill View Park, orchards, allotments, play areas and sports pitches. Housing would be a mix of large detached units, smaller properties and some affordable housing all linked by public squares and spaces.

Although more detailed plans would come at a later date after the outline stage, Persimmon has divided the masterplan into five possible green areas. This includes the “Westgate Employment District” near the Junction 33 gateway and would incorporate the business park aimed at attracting hi-tech and knowledge-based industries and the park and ride. “Junction 33 Central” would be focused around the primary school and the transport interchange area.

Persimmon Homes (East Wales) said the development would fit with the vision of the Cardiff Capital Region Metro through the creation of a proposed “Cardiff North West Corridor” which aims to create new routes and stations from Cardiff Bay up to Rhondda Cynon Taf and via Creigiau. The proposal, which is described as one of Cardiff council’s key strategic sites under the Local Development Plan, will be considered by the council’s planning committee.