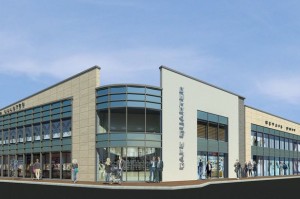 Property mogul David Edwards has unveiled his ambitious plans for several major town centre developments across South Wales, including a £11m development for a boarded-up precinct in Pontypridd. Edwards, of Talbot Green-based Edwards Investments, aims to build 100 one and two-bedroom apartments and more than half a dozen shops on the disused Taff Street site in the next 12 to 18 months. He says several retail giants, including Morrisons, Wilkinsons, Peacocks and Home Bargains, have expressed an interest in the 55,000sq ft precinct development opposite the Old Bridge and Museum.

There is however a hurdle to overcome first with Rhondda Cynon Taf Council over the cost of the freehold interest. The 47-year-old Llantrisant entrepreneur, says that time is of the essence to be able to proceed with the project. The development, which will include both private and social housing, is now back on the market, but Mr Edwards said the local authority need to “unlock the key” to the freehold interest. He said: “This project would turn the town around. It would bring much-needed footfall into the town and change the whole image of the place, while adding to the sustainability and vitality of the centre”.

Mr Edwards said he has a “proven track record” when it comes to similar developments. He bought Llwynypia Magistrates’ Court two years ago, which is now run by training providers ITEC, and has begun two extensive projects in the centre of Barry. He has started work on turning the old Barry Magistrates’ Court into 50 one and two bedroom apartments, six town houses and five shops totalling 14,000sq ft. It will include a Filco supermarket and a Pizza Hut, which was given board approval. The project should be complete in late 2014.

The former council offices at Haydock House on Holton Road, Barry, will also be turned into a mixed commercial and residential development next year. He has also set his sights on transforming the derelict Talbot Green Magistrates’ Court into an Iceland supermarket and 30-plus apartments. He is working with Rhondda Housing Association on the project and has brought on board a development partner, Taff Ely-based Company R&M Williams, to assist with the build.